What does noise affect?

The disturbance of sleep is a major concern for communities exposed to nighttime aircraft noise.

There is no current research that links permanent, long-term health effects to nighttime aircraft noise. However, sleep disturbance is still a major cause of annoyance. Consequently, numerous research studies have attempted to measure the complex effects of noise on sleep.

An overview of the major worldwide noise-induced sleep disturbance studies is provided here. A particular emphasis is placed on studies that have influenced U.S. federal noise policy.

The studies have been separated into two groups:

The relationships between noise levels and the size of the effects are complex. The disturbance caused by an intruding sound depends on

The most measurable effect of noise on a sleeping person is the number of arousals or awakenings. The focus has been on predicting the percentage of the population that will be awakened at various noise levels.

The Federal Interagency Committee on Noise (FICON) produced a document containing an overview of sleep disturbance research. This research was conducted in the 1970s. Several of the studies used existing data on the effects of nighttime noise on sleep changes and awakenings. The Committee noted inconsistency in this data. They did not endorse the reliability of the results.

In 1992, FICON recommended the use of a temporary dose-response curve. This curve predicted the percent of the exposed population expected to be awakened by single-event noise levels. It is expressed in terms of SEL. This curve was based on research conducted for the U.S. Air Force. This data included most of the research performed up to that point. It indicated that 10% of the population was predicted to be awakened when exposed to an interior SEL of ~58 dB.

In the early sleep disturbance research, the controlled laboratory studies did not consider many factors that are important when analyzing sleep behavior. For example:

In the early 1990s, field studies were carried out to confirm the earlier laboratory work. The most significant finding from these studies was that an estimated 80-90% of sleep disturbances were not related to individual outdoor noise events. They were the result of indoor noise sources and other factors not related to noise. Also, it was found that there was less of an effect of noise on sleep in real-life conditions than had been previously reported from laboratory studies.

After 1992, considerable field research was conducted to evaluate the sleep effects in peoples' normal, home environment. Experts believed that laboratory sleep studies showed higher sleep disturbance values than field studies. This is based on the idea that people who sleep in their own homes are "habituated." They become accustomed to their environment and they do not wake up as easily.

In 1997, the Federal Interagency Committee on Aviation Noise (FICAN) used this field research to update its recommended dose-response curve (see Figure 1). This research showed that a maximum of 3% of people would be awakened at an indoor SEL of 58 dB. This is compared to 10% using the 1992 curve. An indoor SEL of 58 dB is equivalent to an outdoor SEL of 73 dB. This assumes a 15 dB Noise Level Reduction (NLR) from outdoor to indoor with open windows. 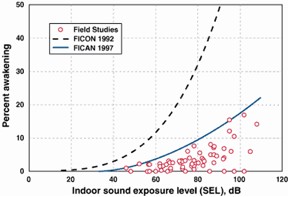 For most of the sleep studies conducted, the focus has been on predicting the percentage of the population that will be awakened at various noise levels.

Regardless of the tools used to measure the degree of sleep disturbance (awakenings, arousals, etc.), these studies have grouped the data into bins. These data bins predict the percentage of the population likely to have this level of sleep disturbance at various sound level thresholds.

Some of the studies have not tried to correlate the Number-of-Events (at various sound level thresholds) that will cause more than one awakening. As a result, two new approaches have been proposed:

It should be noted that these two proposed approaches have not yet been studied and approved by the scientific community. They should therefore be used with caution at this time.