Sonic boom noise issues are different from most other aspects of aircraft noise. The potential annoyance occurs along the flight path rather than near airports.

Aircraft are designed to fly at very high speeds. While they fly, aircraft generate pressure waves, or sound. These pressure waves travel at the speed of sound, about 750 miles per hour. When an aircraft flies faster than the speed of sound (Mach 1.0), it creates a sonic boom. A sonic boom is a loud thunderous sound caused by a large buildup of pressure waves. The sonic boom trailing behind a supersonic airplane is very similar to the V-shaped wake a speedboat makes in a large body of water. When a jet flies by at supersonic speed, the sonic boom sound you hear on the ground is the "wake" of the supersonic jet flying by. Currently, there are no civil supersonic aircraft flying today. 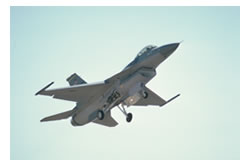 How are Sonic Booms measured?

What Factors that Affect a Sonic Boom?

Many factors control the noiseproduced and region affected by a sonic boom. One of these factors is the size of aircraft flown. Larger aircraft will create louder booms. In addition, aircraft create two shock waves when flying at supersonic speeds - one that comes from the front of the aircraft and one from its tail.

Sonic boom characteristics also depend on the type of flight being flown. Sonic booms produced by aircraft at low altitudes have higher overpressures and affect smaller regions on the ground. Changes in aircraft's speed or direction can either focus or weaken the sonic booms heard on the ground.

Will a Sonic Boom Cause Damage to Surrounding Structures?

Sonic booms experienced by communities usually have overpressures of less than two pounds per square foot (psf). Buildings in good structural condition generally bear no damages from overpressures smaller than 16 psf. Minor damage, such as shattering of windows, may occur between 2 and 5 psf. However, this is rare.

Are There Regulations on Sonic Booms?

The Air Force has restrictions in place such that sonic booms be produced over water at altitudes above 30,000 feet whenever possible. When impossible, aircraft may only fly at supersonic speeds in specially designated areas as dictated by the Headquarters of the United States Air Force, Washington, D.C., and the FAA.

Why are Sonic Booms Necessary?

Most of today's Air Force fighter planes can reach speeds higher than the speed of sound. To increase success and survival of aircrews, it is important that pilots learn to control aircrafts at these speeds. This practice will help them operate the aircraft well in combat situations.